Kenya — home to more than 40 different ethnic groups — boasts of both cultural and natural diversity. If you were to travel across the country, you’d see the Indian Ocean, towering mountains and vast savannas. You’d hear 60 different languages. You’d taste the unique flavors of the many different styles of Kenyan food. It is a truly diverse and vibrant country. And today, we’d like to share an array of interesting facts about kenya — facts that will give you a deeper look into the culture of this beautiful country where hundreds of thousands of Compassion-assisted children live.

Here are some quick, key facts you should know about Kenya:

Economy: Kenya is considered the economic, financial and transport hub of East Africa. Agriculture contributes to one-third of the gross domestic product, but tourism also contributes greatly to the Kenyan economy.

Culture and Traditions of Kenya

Kenya is made up of more than 40 different ethnic groups that speak over 60 languages, making the country’s cultures and traditions just as diverse as the population itself. It’s nearly impossible to list them all, so we’ll give you a few cultural facts:

Religion: Kenyan culture is heavily influenced by Christianity. Over 80% of the population identifies as Christian — a majority of whom are Protestant and Roman Catholic. The remainder of religious practices are mostly made up of Islam and various traditional African religions.

Clothing: With the large number of ethnic groups, there isn’t really a cohesive national dress. Each group has its own unique traditions when it comes to clothing. However, the clothing of the Maasai people in southern Kenya is considered the national attire of Kenya. Their traditional dress includes a red piece of clothing called a kanga and lots of bright necklaces, bracelets and beaded headdresses.

General culture: Kenyans put great emphasis on the values of humility, caring for your neighbors and maintaining friendships. While Kenya is adapting to many modern values like the importance of education, they also remain strongly tied to tradition. While some people wonder if this signifies a lack of commitment to their traditional beliefs, many Kenyan people disagree. Instead, it reflects a reality that progress and tradition can coexist beautifully. You’re more likely to find people who hold more tightly to a traditional lifestyle in the rural areas of Kenya — some of whom live in huts, walk barefoot and dress in colorful robes and jewelry

Music and Dance of Kenya

Out of all the African countries, Kenya has perhaps the most varied assortment of popular music forms, likely due to the 40-plus ethnic groups that make up the country and its culture. Many of the different ethnic groups have their own distinctive musical styles. Historically, music in Kenya has been used for sharing information and stories. But, as oral tradition continues to disappear, the musical traditions of many Kenyans are at risk.

Throughout Kenya, a variety of drums are used in music traditions within the different ethnic groups. For example, the Luhya in western Kenya developed a dance called sikuti, which is named after a drum. It’s an energetic dance performed by a pair of dancers.

Another popular style of music in coastal Kenya is called taarab, which combines traditional African percussion with the sounds of Arab instruments. Traditional taarab is sung in Swahili, but the style continues to evolve alongside the changing of popular beats and rhythms.

From folk and taarab music to imported sounds like hip-hop, reggae, soul, soukous, rock, funk and pop, Kenya’s music has a lot to offer.

Jey was raised in one of the largest and poorest slums in Africa. As a child, he was forced to move to the streets of Nairobi to beg for food and money. And at only 9 years of age, he was arrested and imprisoned for stealing.

When Jey was released, he thought he would have to return to the streets — that is, until he was invited into Compassion’s child development program. Jey was given the resources and the hope he needed to escape the cycle of poverty. At the center, he received food, school supplies, medical care and spiritual guidance. He also learned about music.

Today, Jey is a youth pastor and DJ. He has escaped the cycle of poverty, and now music is part of his story.

Food and Drink of Kenya:

Just like its culture, traditions and music, the food and drink of Kenya is extremely diverse. Each of the ethnic groups has its own styles and specialties. But today we’ll give you a taste (wink, wink) of a few of the most common dishes and drinks across the country of Kenya.

Ugali is perhaps the most common dish in Kenyan cuisine. Ugali is a cornmeal that is boiled into a thick paste. You can think of it like porridge or polenta. Ugali is often accompanied by vegetables, sauce or protein. It’s also a dish that can be made affordably — making it accessible to even the poorest communities in Kenya.

Githeri is another staple dish in Kenya. It is a stew made of corn and beans with vegetables occasionally mixed in. Githeri is easy to cook — all that’s needed is a pot and the few ingredients that go in!

Chapati is Kenyan flatbread. It is made of flour dough that is wound into a coil and fried in oil. The origin of chapati can be traced to the influence of the Indian population in Kenya — it even looks a little bit like naan bread. Chapati is considered to be a special treat in Kenyan culture. It goes well with vegetables and dishes like githeri, or it can be served on its own.

Tea is not only a drink that the Kenyan people regularly enjoy, but it has also become one of the country’s key exports. In fact, Kenya is the biggest exporter of black tea in the world! Tea in Kenya is typically served with milk. It’s often enjoyed with a treat — like chapati.

While Kenya participates in many sports, the country is particularly dominant in long-distance running. In fact, the world records for fastest marathon finishing times for BOTH women and men are held by Kenyans.

Rivlin entrusted the premier with the task after Netanyahu received the most recommendations during post-election talks with party leaders, in a speech from his residence on Tuesday.

Rivlin emphasized that while none of the 13 groups represented in parliament currently held a majority, Netanyahu had slightly better chances of forming a coalition.

However, it was not an easy decision to put Netanyahu in charge of forming the government again, given he is being tried for corruption, Rivlin said.

Netanyahu, the first sitting premier in Israel’s history to stand trial, is accused of bribery, fraud and breach of trust in three separate cases. Prosecutors allege Netanyahu systematically accepted expensive gifts and tried to improve media coverage of him in return for favours.

Voters were again evenly split in the last election, giving no candidate a clear path to victory.

As before, the split lies between a bloc supporting Netanyahu and a group of other parties hoping to oust the long-serving leader.

Netanyahu’s Likud party again got the most votes, with 30. Next came the Atid party, with 17. It has ruled out a coalition with Likud. The conservative religious Shas party came in third place, with nine mandates.

That presages another round of tough negotiations. The last election resulted in a broad, unstable coalition of political enemies that would have seen them taking turns in the prime minister’s office. It collapsed after only a few months amid a fight about the budget.

Gunmen have freed all 279 girls abducted from a boarding school last week, the governor of Zamfara state in Nigeria has said.

When the mass abduction took place, the gunmen also attacked a military camp and checkpoint close to the school –preventing soldiers from initially responding to the kidnapping, Associated Press reported. However, the military and police have since carried out a rescue operation.

The African nation has been the target of several attacks and kidnappings in recent years, including by jihadist group Boko Haram, which is opposed to western education.

Afghan President Ashraf Ghani has drawn up a new proposal for peace with the Taliban ahead of an international conference aimed at jump-starting faltering talks between the two warring sides, official sources said.

It comes after the United States — backed by Russia and other stakeholders — said in its own leaked proposal that it wants to see some form of transitional government involving the Taliban, although Ghani has insisted leaders can only be chosen at the ballot box.

According to official sources, Ghani intends to present his three-stage plan at a United Nations-backed conference in Turkey to be attended by the United States, Russia, and other key regional countries.

A date for the event has not been finalised.

The United States is just weeks away from a May 1 deadline to withdraw all foreign troops from Afghanistan as part of a deal agreed with the hardline group last year — a date US President Joe Biden has said will be tough to meet.

Ghani’s three-stage proposal, key elements of which have been obtained by AFP, includes reaching a political settlement with the Taliban and announcing an internationally monitored ceasefire.

He then proposes holding an early presidential election in which the Taliban could take part to form a “government of peace”.

That would lead to a slew of development programmes across the country, followed by rebuilding the constitutional framework.

Afghanistan’s High Council for National Reconciliation said Sunday it would pull together its own proposals after collecting 30 documents from different political parties and civil society members, as well as from Ghani and Abdullah Abdullah, who heads the council.

At least 101 people have died after flash floods and landslides hit Indonesia and East Timor on Sunday.

The affected area stretches from Flores island in eastern Indonesia to East Timor.

“The mud and the extreme weather have become a serious challenge and the debris piling up has hampered the search and rescue team,” Indonesian Disaster Mitigation Agency spokesperson Raditya Djati told reporters.

“We suspect many people are buried but it’s not clear how many are missing,” his colleague Alfons Hada Bethan, head of the East Flores disaster agency, said.

“The evacuees are spread out. There are hundreds in each sub district but many others are staying at home. They need medicine, food, blankets.

Many of the victims are believed to be from the country’s capital Dili.

Indonesian president Joko Widodo has offered his condolences and urged people to follow the advice from officials during extreme weather periods.

“I have ordered for disaster relief efforts to be conducted quickly and well, for example for health service assistance, availability of logistics and basic needs for the displaced and the reparation of infrastructure,” he said.

Landslides and flash floods are not uncommon across the Indonesian archipelago during the rainy season.

In January this year, 40 people died when flash floods hit the town of Sumedang on Java.

And last September, at least 11 people were killed in landslides on Borneo while a few months earlier dozens died in Sulawesi. 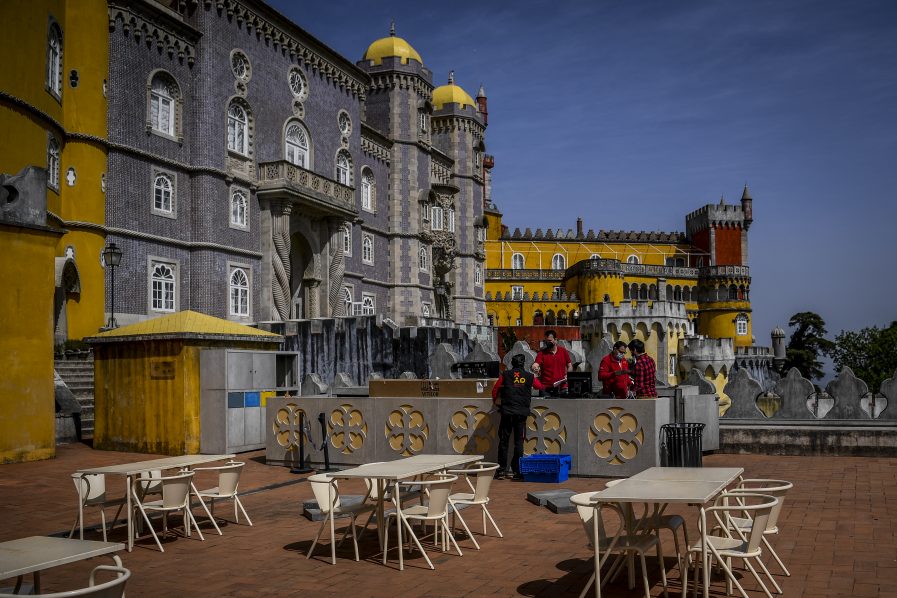 Technicians work at the esplanade of the Pena Palace in Sintra on March 31, 2021, days before the reopening of museums and monuments following coronavirus restrictions. – Hard-hit Portugal has gradually eased a general lockdown launched two months ago, with museums and cafe terraces due to reopen on April 5. (Photo by PATRICIA DE MELO MOREIRA / AFP)

There was an explosion of cases following Christmas and New Year festivities which led to overstretched hospitals and the government imposed a general lockdown in the middle of January and closed schools a week later.

There have been nearly 16,900 coronavirus deaths and 823,335 cases so far, according to an official tally on Sunday.

Monday’s easing comes with some guidelines. Only four people will be able to sit together at a table in cafe terraces while museums can change their opening hours.

Visit www.umuibeonline.com for the love of Igbo Dismiss